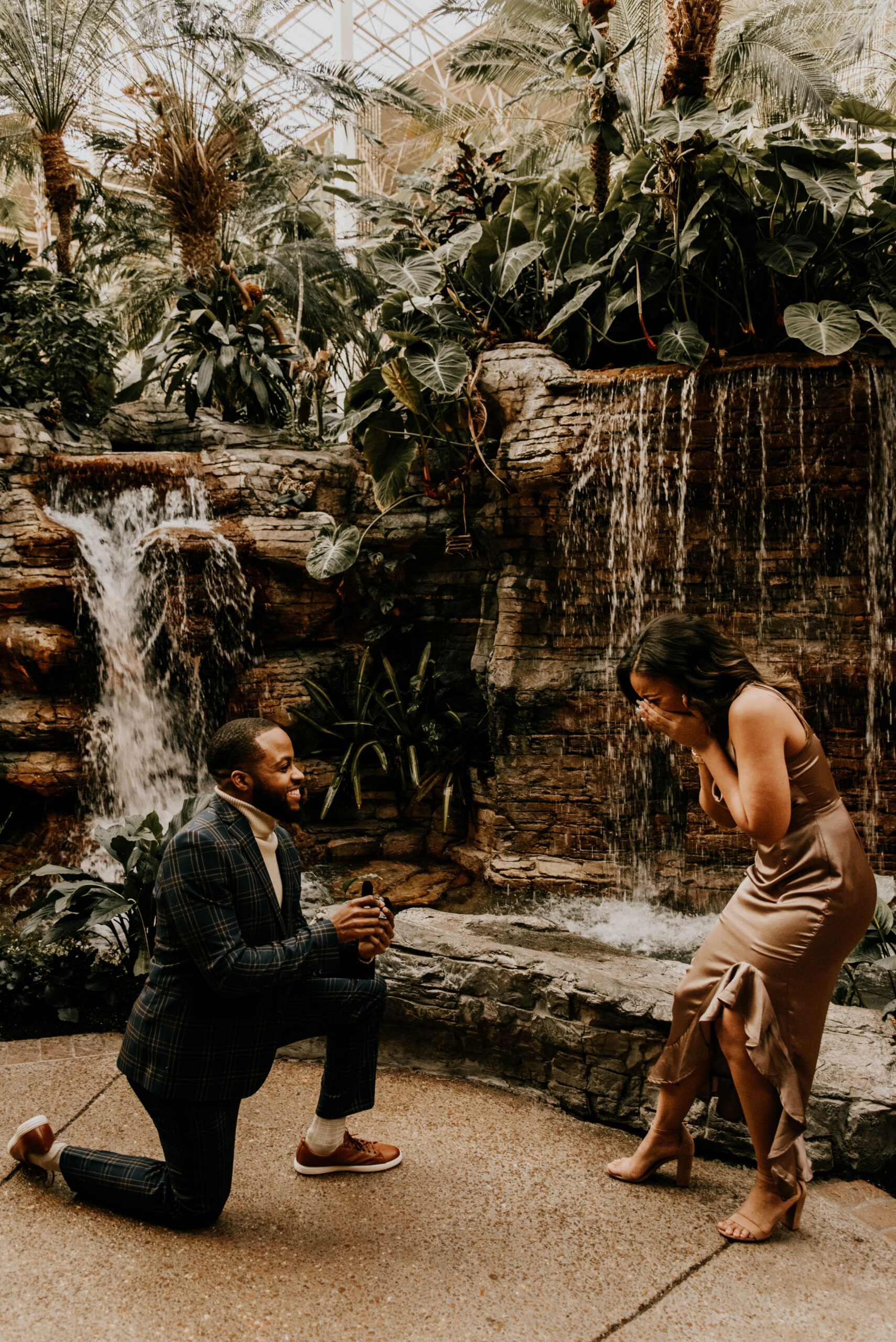 February 22, 2020, the day that will forever be engraved in my heart. I always knew Demarcus would make our proposal extra special, but boy oh boy was his plan far greater than I would have ever imagined it would be.

Demarcus and I met almost 8 years ago at Middle Tennessee State University’s step show. We were following each other on Instagram for quite a while and my best friend was a childhood friend of his, so we would always like each other’s pictures. Well one night when I was out bowling with my friends, I got REAL bold and decided to post a comment on his picture to tell him how good he looked. LOL!

Seconds later, I instantly regretted it and went back to delete the comment so I didn’t seem too forward. But I failed to realize that deleting it would not prevent him from seeing it. The comment had already popped up on his phone and he responded confused since he saw the comment was deleted. *Face Palm* From that moment forward, we never stopped talking and soon after decided to meet in person. It was at that moment, 7.5 years ago at Middle Tennessee State University’s step show, where I would finally meet my now fiancé/future hubby. But ok now let’s be real, I definitely did NOT feel that way when I first met him LOL. Honestly, it was an immediate No for me dawg *in the iconic voice of American Idol’s Randy Johnson* and I told my best friend, Janae, (who was with me at the time) that it wouldn’t be going any further than that. It’s funny to think about it now because of the reasons we’re so shallow and stupid that it just shows my age at the time. I told Janae his face was too greasy (he has oily skin LOL) and that he was too shy and too short. Welp, I guess he had some sort of game cause that sure as hell wasn’t enough to keep me away! 😉 Okay, now let’s move on to the good stuff…THE PROPOSAL!

On February 22nd, I was scheduled to work at my salon doing makeup from 1pm to 7pm. But on Monday the 17th, they reached out to me to let me know there was a mix up with scheduling so I was no longer needed to come in that day. I was a little confused as to how that happened but didn’t think much of it. Then I had a photographer friend of mine, who usually did our couples shoots for us, reach out to me. She said she was in need of a couple to model for her on Saturday the 22nd and said we are always easy to work with so she wanted to reach out and see if we would be interested. Her work is incredible so of course, I said YES! Her only request was to be color coordinated and more on the dressier side.

Around that same time, both my best friend and future mother-in-law reached out to me to go get pedicures. I said yes to my future mother-in-law and Wednesday night we went to our favorite spot, Elife Nail Spa, to get our nails done and still I didn’t think anything of it.

Well now the day has finally come, it is Saturday, February 22nd and we are getting all fancied up for our photoshoot. He had already bought this really nice suit that he hadn’t got a chance to wear yet and I had already bought this satin ruffle dress from Missguided months ago that I was saving for the perfect occasion. Little did I know, that occasion would be our engagement. We get to this really nice hotel (Gaylord Opryland Resort & Convention Center) where we are taking the pictures. We are walking around, stopping randomly to get a few shots, doing some single shots, etc.

Then we get to my final single shot next to this beautiful waterfall and I’m standing there posing and looking up to the ceiling. My sweet photographer is cheering me on letting me know I look great and to just hold that pose, tilt my head up a little more, etc. Then she says, “Ok now turn around.” I turn around and at first I just see my handsome fiancé on one knee, but then I look up and I see our family (both in-state and out-of-state) and our friends standing behind him.

That is the moment I LOST it!! I immediately started crying and became so overwhelmed with joy as I soaked in everything that just happened. I was so surprised and so freaking excited that I get to marry my best friend!!!

*Some of these links may be affiliate links in which I earn a small commission from your purchase. Thank you for your support in helping me to continue creating content and sharing products that I love! 🙂